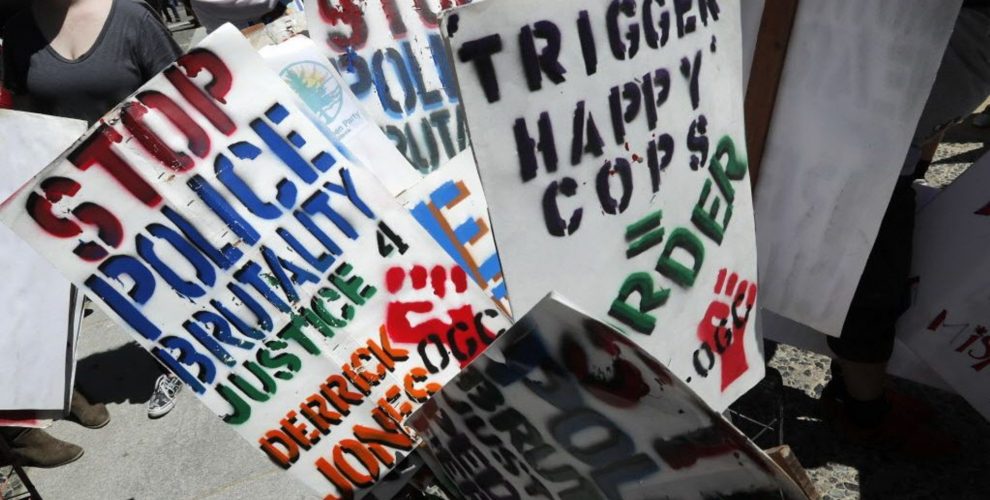 For African Americans, police brutality is the most persistent part of the system of racism that has oppressed and deprived them of civil liberties, a system for discriminatory hatred and control. Slavery, segregation, redlining and several forms of prejudice prevalent in the US in the past have been gradually abolished over the last 200 years but brutality remains entrenched in the American police psyche as evidenced in the numerous documented instances of police murders of unarmed or harmless black people.

Over the last 200 years in both the conservative South and liberal North, the police have protected and implemented segregation and racism – assaulting civil rights activists and disrupting demonstrations among African American laborers seeking better work conditions and environs. On the frontline of fighting iconic civil rights leaders such as Martin Luther King Jr, Malcolm X, Kwame Ture and others were bigoted policemen who enjoyed the distasteful task of preventing the creation of a more equal society (Bor et al 2018).

In the South, police once collaborated with the Ku Klux Klan in the dirty work of implementing racial segregation. Southern police often unleashed German shepherds on civil rights activists and indiscriminately battered protesters even if they included young black children (Pegram 2016). The police force was responsible for an untold number of beatings, killings, and disappearances of blacks who fought for their rights. In the North, police attempted to secure white dominated neighborhoods by stopping the rising African American populace that was moving into the industrial zones in search of jobs amidst the Great Migration It was not strange for Northern police to join white crowds as they assaulted black tenants trying to move into white communities, or dark laborers attempting to take employments set aside for white workers (Barlow 2018).

Accounts of police brutality are numerous within neighborhoods that African Americans dominate. Young blacks are several times more likely to be shot and killed by police compared to young whites (Moore et al 2016). They are bound to face continuous regular insults and outrages from the police compared to any other ethnicity. In essence, Black people truly believe the police to be the face of a bigger hidden system of discrimination in the justice system, jobs, education, and shelter. The racial discrimination has inflamed reactions to of police in recent years, leading to the Black Lives Matter pressure group that has ascended to national attention because of the contentious police killings of   Garner in New York,   Brown in Ferguson,   Gray in Baltimore,   Rice in Cleveland, etc. For observers, the killings have raised worries that black lives are less important to the police force and that the next casualty of a police shooting could be any African American.

Boston University’s School of Health and the University of Pennsylvania released new research that found the high rate of unarmed African Americans being executed on account of police brutality has caused increased mental health problems and other psychological well-being issues among blacks (Bor et al 2018). At the end of the day, police brutality is harming the psychological well-being of African Americans – even the individuals who have no immediate association with men, women, and adolescents who have lost their lives.

Savvy policing methods capable of differentiating between frivolous violations and genuine crimes, between most of the well-behaved citizens and the small minority of criminals in a neighborhood, are very possible because this happens every day in white-dominated neighborhoods across the U.S. It’s not that the police are generally brutal and incapable of handling Americans in a dignified manner, no. The same police officers who perpetrate brutal acts of violence against blacks are quite courteous when handling white residents in white neighborhoods.

A study by YouGov Omnibus (2018), shows black people are more likely to accept as true that cops are prejudiced against them. They are in addition likely to say it’s ordinary for blameless black people to be arrested or indicted for wrongdoing. Only 14% of African Americans state they trust the police “very much.” The rest of the public was more than twice as likely (33%) as African Americans to pick this answer. Another 7% of the overall public and 13% of blacks say they “don’t trust the police at all.”

“Half (50%) of the total population believes it’s somewhat or very common for innocent people to be arrested for a crime; nearly three-quarters (73%) of black Americans chose the same answers. About four in ten people (42%) overall say it’s common for innocent people to be convicted of a crime, while 67% of black people say it is common” (YouGov 2018).

African Americans frequently face higher rates of crime and consequently need good relations with the police. However, this is hardly possible until the U.S. figures out how to address its history of utilizing the police as an instrument to fortify systems of racial disparity. The desire to use the police as a tool of oppression against the black race seems to be deliberate and systematic considering the low conviction rates of police officers accused of killing innocent or unarmed black men in the course of their patrols and even caught on camera committing these acts of brutality.

Bor, Jacob, et al. “Police killings and their spillover effects on the mental health of black Americans: a population-based, quasi-experimental study.” The Lancet (2018).

Advantages of the Greenhouse Effect and Disadvantages