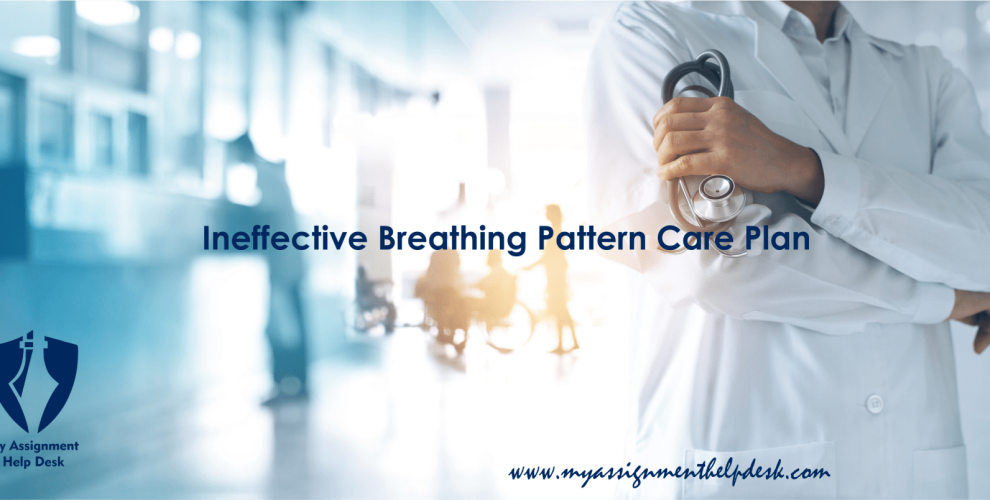 The respiratory system cannot be considered healthy when there is an ineffective airway. That is the problem that comes in when the abdominal wall and the excursion during the inspiration and expiration do not maintain an optimum level of ventilation. Ineffective breathing is exhibited when there is a state of low breathing rate, reduced depth, timing, and rhythm of breathing is altered.

When the breathing pattern is altered, the body lacks proper oxygen level, which is required by the cells, which leads to difficulties intolerance to physical activity. Appropriate management of the patients having oxygen difficulties is necessary after careful diagnosis. When making a write up of the nursing care plan for ineffective breathing, you’ll find this article useful.

How does the Problem Manifest? / Signs and Symptoms

Ineffective breathing pattern is exhibited in different ways depending on the patient lifestyle and severity of the condition. However, there are common signs and symptoms that get manifested by the majority of the patients:

The patients should be screened by the nurse during the diagnosis process, which should aid in the formulation of the nursing care plan.

What causes an ineffective breathing Pattern?

Modern lifestyle has been considered as a significant cause of hyperventilation on people. Some of the lifestyle-related issues include mouth respiration, laziness, overeating, addiction to substances, oversleeping. These causes tend to intensify the basal breathing of the patient and decreasing the body-oxygen content.

Another factor that is associated with ineffective breathing patterns is the lack of physical exercise. A sedentary lifestyle, which is related to a lack of physical activity, leads to reduced oxygen levels in the brain. If this persists, it may lead to a decreased desire to exercise and cause more breathing problems. Lack of nutrients, which is commonly related to the consumption of junk foods, is a cause of hyperventilation.

Concerning the body, the acid-base balance should be enhanced, and the feeling of tissue breakdown should be eradicated. More importantly, after the nursing care, the patient should verbalize an awareness of the causative factors of the problem and demonstrate the plan of action to change the lifestyle.

Besides, the patient should demonstrate a general coping behavior by acting to avoid the causing agents of the breathing problems such as lack of physical exercises.

The nursing plan described here is based on the prioritization of tasks/ undertakings by the nurse. The specific functions in the plan of care may vary depending on the most conspicuous symptoms that are shown by the patient, but there is a consensus on the approach. This section covers three categories of the healthcare approach that includes a comprehensive care plan for patients suffering from ineffective breathing pattern.

Subsequently, the nurse should assist with the necessary testing that will encompass the review of the lung volumes, pulmonary function, which helps to diagnose the severity of the lung condition. Then, an inspection if the chest x-rays should be done, indicating whether the disease is in an acute or chronic state.

Laboratory tests data should be reviewed, especially ABGs, drug screens, and the pulmonary function. ivermectina dosis para perros adultos The nurse should also consider the patient whether he/she is exhibiting emotional responses such as gasping, crying, or showing tingling fingers. The priority should end with an assessment of the discomforts that the patient is exhibiting.

Nursing priority 2: Provision of Relief for the Causative Factors

To relieve the patient the pain, the nurse should make efforts to normalize the breathing pattern and giving a solution to the life threatening symptoms. The plan of care to relieve the causative factors should be:

By the end of this plan of care, the patient should have some of the direct breathing difficulties addressed.

The final category of intervention encompasses wellness teaching and discharge consideration. First, the nurse should review the etiology to get the possible scoping behaviors that he/she can share with the patient. Then, the nurse should teach the patient to consciously control the respiratory rate appropriately but not in a compelling way.

The nurse should also show the patient how to maximize respiratory effort by having a good posture and using the accessory muscles effectively. In addition, the nurse can assist the patient in learning the retain exercises through the diaphragm, abdominal breathing, and pursed-lip method. Other teachings include energy conservation and limiting fatigue through enough rest periods.

Most importantly, the nurse should point out to the patient on the lifestyle causative agents that needs to be addressed through a behavioral change such as smoking.